This project continues research on the Coca-Codo Sinclair Dam, Ecuador. It inscribes the dam as a case study within a larger body of research on Ecuadorian hydropower projects and their impacts, both isolated and cumulative, on surrounding landscapes. This extended research involves the application of a similar analysis to other large hydropower structures, and will aim to highlight patterns in the externalities caused by these projects on the local ecology and their associated communities.

The research will culminate in a series of maps and drawings that highlight the scale of modification that has occurred in the landscape as a direct result of hydropower implementation, and visualize the extent of each project's externalities.

A pattern of discrepancies exists in the interaction between large-scale, man-made infrastructural projects, and the environmental and cultural contexts that they occupy. This phenomenon is particularly apparent in the Amazon, where many of the world’s projected hydropower dams are scheduled to be built in the coming years, predominantly along the foothills of the Andes. The scale of certain hydropower projects is alarming, particularly those designed with little to no integration of the variations in topography, geology, hydrology, bathymetry in the Amazonian landscape. The result is often a hard-edged, maladapted design for a structure that is to operate on a shifting, varied landscape. Ecuador’s Coca Codo Sinclair Dam illustrates this discrepancy particularly vividly.

This study entails an examination of the dam’s repercussions on the Napo and Coca Rivers, expressing the changes it has caused in the riverine landscape in both drawing and map form. This includes documenting the fluctuations in sedimentation in the river, both upstream and downstream, the modifications of water flows that have been observed around the San Rafael waterfalls, the riverbed’s progressive erosion, interrupted fish migration, the displacement of crude oil pipes that intersect with the river downstream, and the consequent ramifications that such changes have had on local populations.

END_OF_DOCUMENT_TOKEN_TO_BE_REPLACED 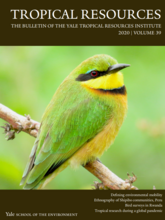