Floristics of cacao agroforestry in the Mata Atlântica of southern Bahia, Brazil

Floristics of cacao agroforestry in the Mata Atlântica of southern Bahia, Brazil

Sustainable land use practices are urgently needed to aid the conservation of biological diversity and natural resources as well as for social and economic development to sustain local communities living within natural or semi-natural ecosystems. Cabrucas, a traditional system of agroforestry management for cacao, entails clearing the native forest understory and planting cacao trees under the shade of the forest canopy. In this study, I documented the species richness and diversity of four cabruca stands in southern Bahia, Brazil. Of the 4,435 trees measured in the cabrucas, I found a total of 103 different tree species $$5 cm DBH, in 33 families and 61 genera. Almost a fifth (17%) were neither Theobroma nor Musa species. Most of these individuals were in the families Leguminosae, Rutaceae, Moraceae, and Meliaceae. Future analyses will assess how similar these cabruca stands are to adjacent secondary forest stands of the same age class to elucidate opportunities for applying forest restoration principles and silvicultural techniques to the management of landscapes dominated by agricultural production.

The Atlantic Forest in Brazil is one of the most biodiverse forests in the world with over 8,000 vascular plant species, approximately 40% of which are endemic to the region (da Silva and Casteleti 2003, Galindo-Leal and Câmara 2003). However, very little of this rich forest remains: just 9% of the original extent of the moist tropical forest in the cacao-growing region of southern Bahia is left. Despite this situation, the area holds more old-growth and secondary forest patches with more endemic species and greater species richness than any other part of the Atlantic Forest, largely as a result of traditional agroforestry management known as cabruca (Alger and Caldas 1994, Thomas et al. 1998, Rambaldi and Oliveira 2003, Rolim and Chiarello 2004). In cabrucas, native overstory tree species are retained for their shade cover while the understory is cleared and replaced with high quality cacao (Theobroma cacao L., Malvaceae s.l.). Yet, the future of conserving native species within this unique agroforestry system is uncertain.

As human populations continue to increase locally in the cacao-growing region of Bahia, and world chocolate consumption is expected to grow by 2–3% per year (Lass 2004), the pressure on farmers to intensify cacao production is also likely to increase (Schroth and Harvey 2007). Over the last two decades, farmers have frequently opted to simplify the native shade canopies of cabruca agroforestry systems and replace them with early-successional and/or exotic tree species (Rolim and Chiarello 2004), or opt out of cacao cultivation entirely and convert the cabrucas to other agricultural land uses such as pasture or annual crop production, that are generally less compatible with biodiversity conservation (Schroth and Harvey 2007, Rayner et al. 2011). Sustainable land use practices are urgently needed to facilitate the conservation of biological diversity and natural resources, regenerate degraded agricultural fallows adjacent to native forest stands, while addressing economic pressures faced by local communities.

A driver of the high biodiversity of cabruca systems is the selective management and assisted regeneration of native overstory shade species, and selective plantings of food-bearing species within available niches amongst cacao stems, increasing complexity in vertical structure and compositional diversity (Young 2017). As part of a larger study comparing the structure and composition of cabruca forest to natural forest, I conducted vegetation surveys of four cabruca forests. Here, I document the diversity and floristics of the trees of these cabruca agroforestry systems.

At each of the four cabruca sites I established three 0.5 ha fixed area plots (total sampling area 6 ha). Cabruca plots were located in the center of at least two hectares of contiguous cacao cultivation to minimize edge effects, with 20m between each plot. Within each plot we established ten parallel transects (10m x 50m) along either N-S or E-W coordinates to minimize heterogeneity of spacing density that occurs on steep slope inclinations. The first transect of each plot was placed 10m from the corner of the plot. Within each transect I identified and measured all woody trees $$5cm diameter at breast height (DBH, measured using a calibrated diameter tape (cm) at approximately 1.37m above ground level). To account for the consistent presence of bananas and plantains (Musa spp.) in these agroforests, I also included monocots, Musa spp., and members of the Palmaceae family $$5cm DBH. Unknown species were flagged, and leaf samples were collected, dried, and mounted as herbarium vouchers at Instituto Floresta Viva for later identification.

Figure 1. The number of trees in the top 18 families in four cabruca stands in southern Bahia, Brazil. Most Malvacaeae are Theobroma cacao; most Musaceae are Musa spp.

Over all plots, the most common families, excluding Theobroma (Malvaceae) and Musaceae, were Leguminosae (104 trees), Rutaceae (94), Moraceae (82) and Meliaceae (61) (Fig. 1). A total of five families had only one individual and 17 families had 10 or more stems.

Over all plots, the most common identified species were Cedrela atlantica (61), Artocarpus heterophyllus (54), Cordia trichotoma (48), and Citrus tangerina (48). A total of 54 species were present as a single stem; 22 species had 10 or more stems (Fig. 2).

A constrained correspondence analysis of the families in each plot showed that sites grouped together (Fig. 3). The first axis explained 29% of the variation, and the second axis 22%. It is clear that the families with single species are driving the separation of sites in this analysis. 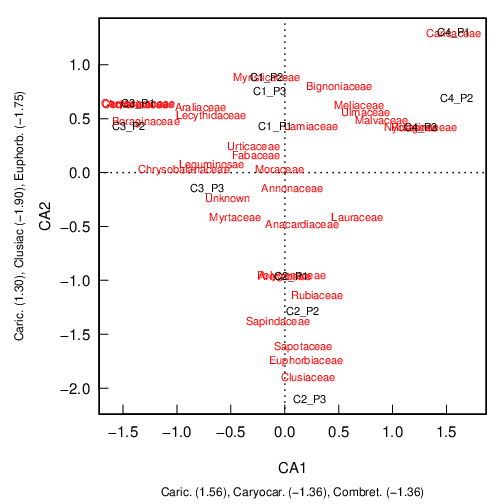 Figure 3. Biplot of a community correspondence analysis of four cabruca stands in southern Bahia, Brazil. Three plots (P) were located in each of four stands (C).

The goal of this study was to provide a baseline ecological analysis to test the underlining “mimicry” principle behind agroforestry design and management, and quantify the similarities in structural and compositional traits between a typical multi-strata cabruca cacao agroforest and an adjacent native secondary forest. In 6 ha of cabruca agroforestry plots, I found a high diversity of non-Theobroma species, with 33 different families and 103 different species. This richness is comparable to other cabruca systems. For example, Sambuichi and Haridasan (2007) found 180 tree species and Lobão and Valeri (2009) 101 tree species in other studies from Bahia.

Despite the high abundance of Theobroma cacao and Musa, the floristics of these cabruca systems reflected the general patterns found in the Atlantic Forest, with high abundance of Leguminosae, Moraceae, Meliaceae, among others (Oliveira-Filho and Fontes 2000). However, whether these agroforestry systems “mimic” natural forests remains to be seen. Cabrucas, rather, may be simplified in structure and floristic composition as compared to secondary forests. However, there is ample growing space available in the understory, subcanopy, and canopy to increase agrobiodiversity by selecting and planting native ethnobotanically valuable species in available vertical gaps in the strata (Young 2017). Thus, these agroforests could be managed like secondary forests following assisted natural regeneration and successional forest stand dynamics to improve vertical assemblages of multi-functional species at each stratum. These forest would then better incorporate native ecological principles into agroforestry design and management.

This research was conducted in collaboration with Universidade Federal do Sul da Bahia, Instituto Floresta Viva (Serra Grande, Bahia, Brazil), the New York Botanical Garden Institute of Economic Botany, and Yale School of Forestry & Environmental Studies with generous financial contributions from Tropical Resources Institute (TRI), the Yale School of Forestry & Environmental Studies, the MacMillan Center for Latin America and Iberian Studies, and the Carpenter-Sperry travel grant. I am grateful for the invaluable support from my academic and research advisors, Mark Ashton and Simon Queenborough (Yale University), Charles Peters (New York Botanical Garden, Institute of Economic Botany), and Prof. Daniel Piotto (Universidad Federal do Sul da Bahia), and for the hard work and dedication of my field research assistants, Jucelino Oliveira Santos, Ronildo, Edilson Damaceno, and William W. Young. Special thanks to my research site hosts at Fazendas Pedro do Sabiá, Lagoana, and São Francisco, to Wayt Thomas and Lawrence Kelly (New York Botanical Garden) for their counsel on botanical identification and research methods, to Timothy Gregoire, Craig Brodersen, Marlyse Duguid, Meghna Krishnadas, and colleagues in the Ashton Lab Group for their statistical and research advice, constructive criticism, and feedback (Yale University); to Ilana Stein (UC-Berkeley) for her technical advice and support in the field; and to Ajit Rajiva (Yale University) for his GIS and R troubleshooting skills.

Oliveira-Filho, A.T. & Fontes, M.A.L. 2000. Patterns of floristic differentiation among Atlantic forests in southeastern Brazil and the influence of climate. Biotropica 32, 973–810.