In the summer of 2019, I had the opportunity to go to Rwanda to carry out a survey I designed that would document forest bird diversity. I was interested in studying some of the bird species in East Africa’s Albertine Rift, which is an extremely biodiverse chain of tropical mountains and valleys that extends through parts of Uganda, Democratic Republic of Congo, Rwanda, Burundi, and Tanzania. The Albertine Rift is recognized as an Ecoregion by the World Wildlife Fund, an Endemic Bird Area by BirdLife International, and as part of the world’s “10th most threatened forest hotspot” by Conservation International. The Albertine Rift is home to 33 endemic bird species, 17 of which are labeled as threatened by IUCN. Endemic birds (species which are found only within a limited area) are a big draw for birders like me but are also of interest to conservationists, because endemicity can sometimes lead to vulnerability of the species. If a type of bird is found in a relatively small region, this makes every bit of viable habitat count.

Although there are several protected areas in the form of national parks and forest reserves across the region, human settlements and agricultural landscapes often directly abut park borders, and Rwanda has some of the highest rural population density on the continent. Across the Albertine Rift, land conversion for farming has already removed 38% of suitable habitat for the average endemic plant or vertebrate species (Ayebare et al. 2018). Given such habitat loss, islands of tropical montane forest like Rwanda’s Gishwati-Mukura National Park might represent the last refuges for several of these local bird species, some which are still under-studied. It is likely difficult for small birds who prefer dense forest cover to disperse between protected areas across intensive agricultural land, meaning these isolated pockets of nature must be effectively protected to maintain as much of the native ecological community as possible. 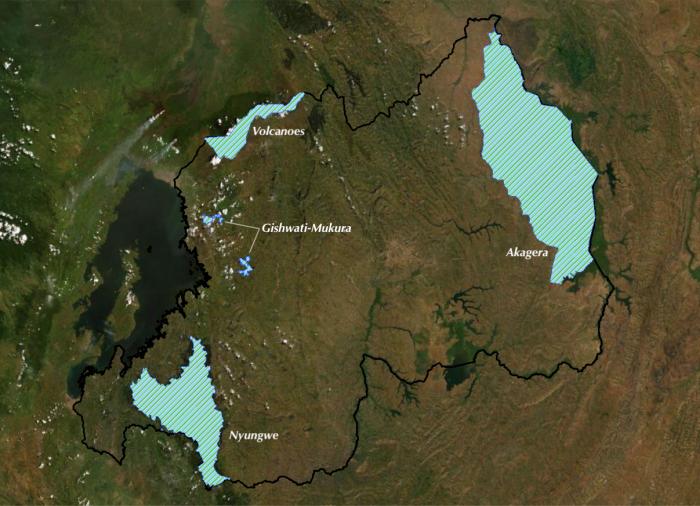 Gishwati-Mukura National Park is comprised of two former forest reserves, Gishwati and Mukura. These forests are about 20km apart from each other in the Western Province of Rwanda and were incorporated as a park in early 2016. Together they amount to almost 3,500ha of forest, yet some of each has been degraded due to mining, livestock grazing, and wood-cutting (REMA 2018). Gishwati and Mukura forests used to be considered Important Bird Areas by BirdLife International. Given how drastically the reserves have shrunk, especially after a misguided World Bank cattle project in the 1980s and the relocation of refugees after the genocide of 1994, both forests have been removed from that classification. Though Gishwati forest lost at least 93% of its original cover during the 20th century, both Gishwati and Mukura host many species birds, plants, mammals, and herpetofauna that are endemic to the Albertine rift (REMA 2018). 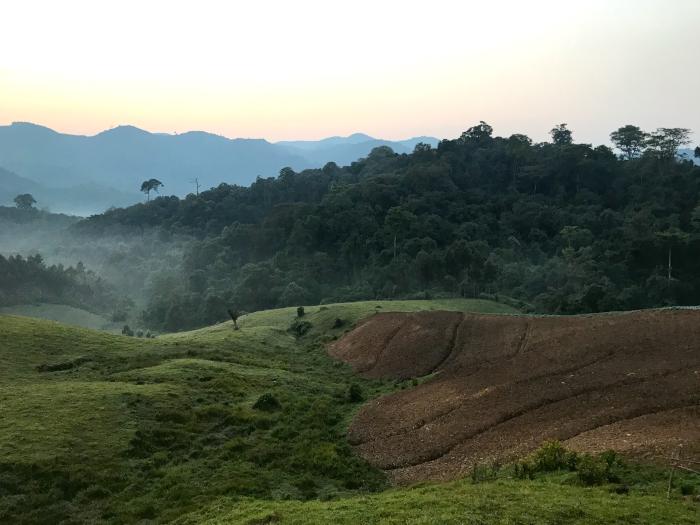 Fig. 2. A view of Gishwati from neighboring cattle pasture; you can see the lack of any real buffer zone between forest and agricultural landscape. Credit: Seth Inman.

Gishwati forest has small populations of chimpanzees and golden monkeys. This is creating opportunities for jobs in tourism: starting in 2021, Gishwati forest should be opened up for visitors rather than just researchers and government officials. There is also a multi-million dollar project around Gishwati and Mukura, funded mostly by the Global Environment Facility and the World Bank, called the Landscape Approach to Forest Restoration and Conservation (LAFREC). Through this mechanism, the government of Rwanda has been planting trees in the national park and its buffer zones as well as building barbed-wire fences to keep cattle out of the forest. Thus, study of the park’s avifauna and its relationship with the local land use mosaic can be directly relevant to conservation planning in coming years. 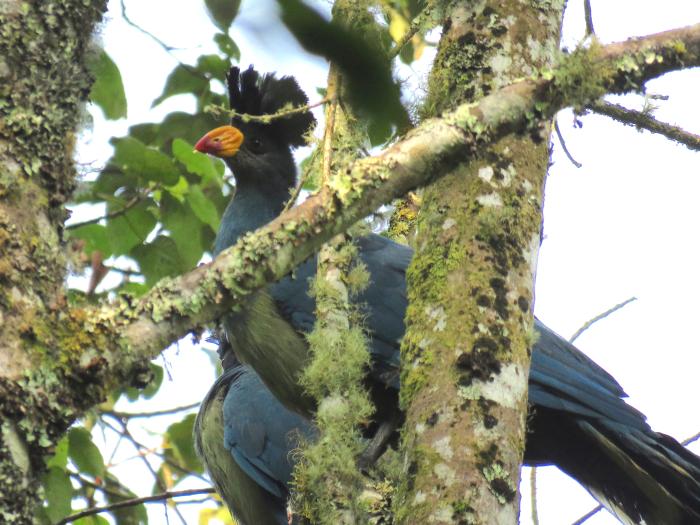 General avian surveys have been conducted in Gishwati, but their results are primarily found in broader biodiversity reports that, while rich in data, are unpublished or unavailable online. I stayed at the Shinehouse Research Station––just outside Gishwati forest––between June and August of 2019. I hired a Rwandan field assistant, Claver Ntoyinkima, to work with me. Claver is a highly experienced birder and park guide who had helped a YSE student conduct research in Nyungwe National Park a couple years ago. His expertise in identifying the calls and field signs of forest birds was invaluable when it came to documenting what species were where in Gishwati. I’m hoping that comparing bird populations across this montane habitat and with prior observations will yield evidence for effects of forest size and degradation on certain types of birds and provide valuable information on present avian diversity dynamics in a new national park that receives more scientific attention for its primates, especially chimps. 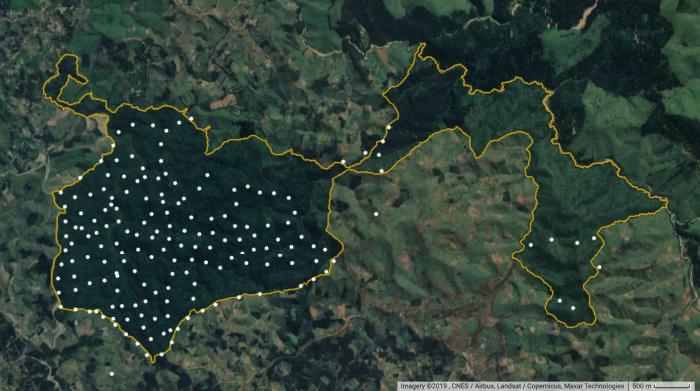 Over the course of 40 field days, we conducted 180 point counts between sunrise and noon along approximately 300 km of transects and trails in Gishwati Forest or within 1km of its boundary. This included over 400 hours of direct and opportunistic observations while walking between points. After giving birds a minute to settle after our arrival at each point, we documented every individual bird heard or seen for ten minutes. We are fairly confident that we detected a majority of the birds that were present during our limited field season, but it is possible that certain species were consistently silent or cryptic during our field season, which had aberrant rainfall. Anecdotally, the rainy season appeared to be delayed for much of Rwanda in 2019: Shinehouse Research Station recorded only about 5680mm of rain between 1 January and 31 May 2019, compared to the previous 3-year average of 9050mm (thank you to Dr. Chancellor and Dr. Rundus from Shinehouse, who provided rainfall data). 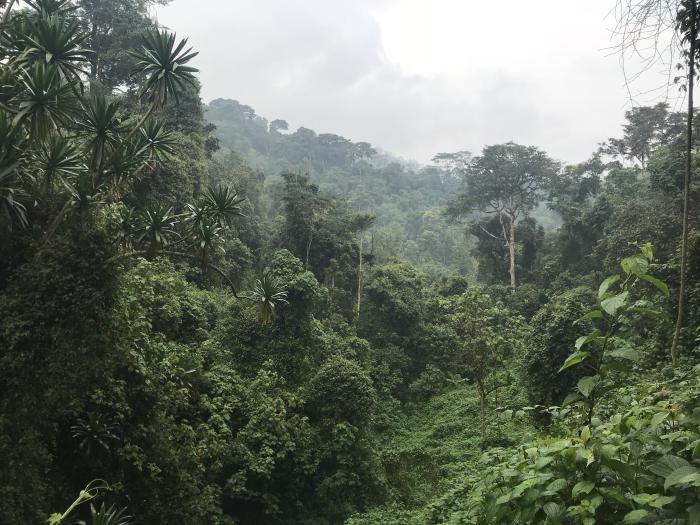 Claver and I identified ten bird species that had never previously been reported in Gishwati, and failed to find over 30 resident species previously reported during the last twenty years. These discrepancies could be due to general randomness in bird movement and behavior that can lead to inconsistent observations over time, or it could mean that many of those 30 species aren’t around anymore. It’s also always possible that there were potential transcription or identification errors by previous surveys. As our survey dates did not include the Palearctic migration (when birds fly south to warmer climes, like Rwanda, for the winter), we undoubtedly missed species that are frequent visitors to Gishwati at other times of the year. One species reported for the first time, Grauer’s Swamp Warbler (Bradypterus graueri), is both endangered and an Albertine Rift endemic. This dual status means that there is a sense this species is rare or that there is a “last chance to see” the bird; finding the Grauer’s Swamp Warbler was one of the highlights of the season, since its presence in Gishwati confirms the protected area’s value for conservation of sensitive species. 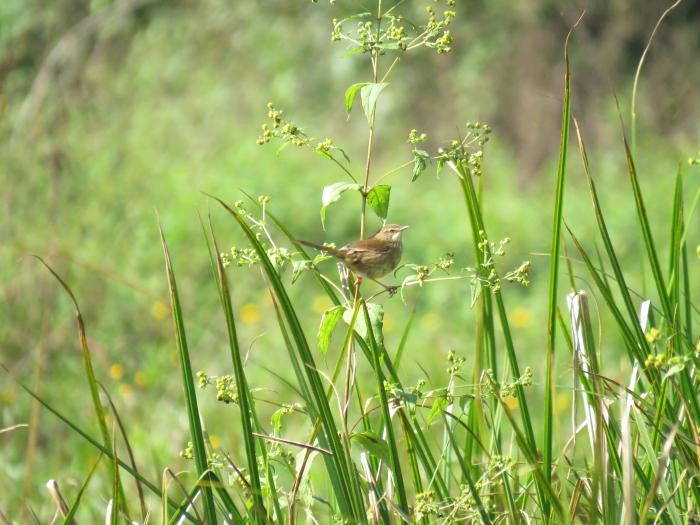 Claver and I recently published the list of species we documented and the methods of our survey (Inman & Ntoyinkama, 2020). In coming months, I hope to be statistically analyzing the distribution and frequency of birds in Gishwati forest to ascertain whether there are clear patterns that indicate a preference for being far from the edge of the woods.