A survey of seedling herbivory in a Neotropical rain forest in Yasuní National Park, Ecuador

A survey of seedling herbivory in a Neotropical rain forest in Yasuní National Park, Ecuador

Herbivory, particularly by feeding insects, has long exerted a strong selective pressure on plants (Ehrlich & Raven 1964). This pressure is apparent in the wide array of defense mechanisms that has arisen on account of relationships between plants and their natural enemies through evolutionary time (Agrawal & Fishbein 2006). Particularly at the vulnerable seedling stage, herbivory is among the most common sources of mortality (Bagchi et al. 2014), which in turn shapes forest communities (Janzen 1970). Here, I briefly present the results of a large-scale survey of herbivory in the seedling community of a Neotropical ever-wet forest at Yasuní National Park, Ecuador.

Fieldwork was conducted in Yasuní National Park in the Ecuadorian Amazon. The Yasuní Forest Dynamics Plot (FDP, 0°41′ S, 76°24′ W), is a 50-ha forest plot in which all trees have been mapped, marked, and identified (Valencia et al. 2004). The FDP was established in 1995 by the Pontifica Universidad Católica del Ecuador (PUCE), the Smithsonian Tropical Research Institute, Panama, and the University of Aarhus, Denmark (Valencia et al. 2004). This evergreen lowland terra firme wet forest occurs in an aseasonal climate with a mean annual rainfall of 3081 mm and no month regularly with <100 mm (Valencia et al. 2004) and temperatures averaging 24 to 27°C for all 12 months (Pitman 2000). 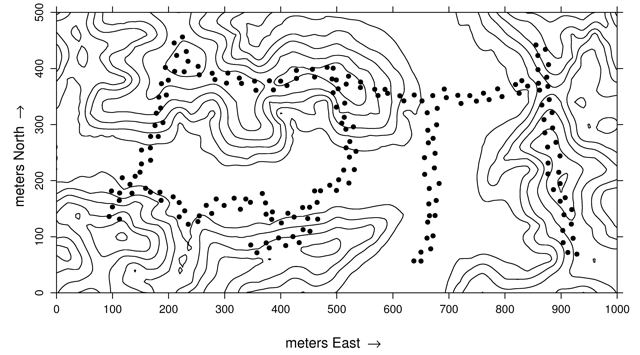 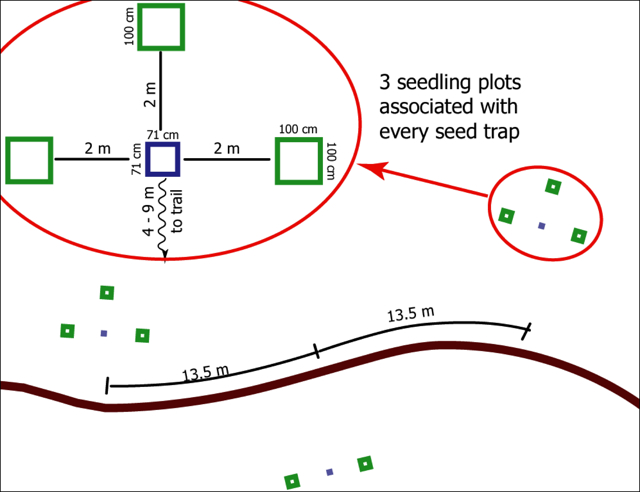 Between May and August 2019, all seedlings between 5 cm and 150 cm in height within the 600 plots were surveyed for herbivory at the individual leaf level, with the exception of seedlings for which age is unknown (i.e. seedlings present at the time of the first census of the plots, greater than 18 years old). All cotyledons are excluded. The dataset presented here contains only seedlings over one year old and that were first marked and tagged in 2018 at the latest. In total, there are 1,067 species and 3,910 seedlings represented in this dataset, with a total of 29,016 leaves. Area loss on each leaf was estimated visually as a percentage of total area lost (Johnson et al. 2016) at a single point-in-time value of standing herbivory. Specifically, values for percent area loss was scored as one of seven bins: no damage, <5% lost, 5–25% lost, 25–50% lost, 50–75% lost, >75% lost, and entire leaf lost. The final bin was included to partially compensate for standing herbivory underestimating herbivore damage, particularly when entire leaves are lost at once. A leaf was placed in the final category of entire leaf lost when it was apparent that a leaf was lost to herbivore damage, such as when only a part of a petiole remained. Compared to finer-resolution methods, such as image analysis, visual estimation was much quicker and consequently allowed for a considerably larger sample size; in this case, every leaf on all surveyed seedlings was able to be scored for herbivore damage. 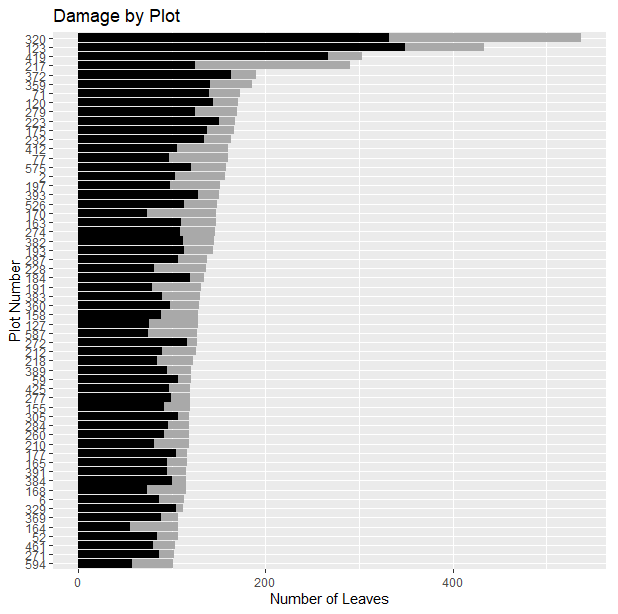 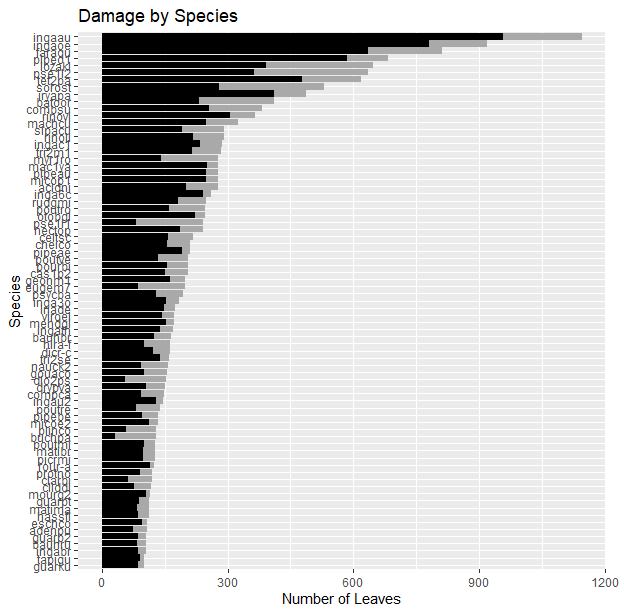 A total of 6711 leaves (or 23.77% of the full set) suffered no damage, and 21514 leaves had some form of damage. The observed distribution of herbivore damage was similar to a previous large-scale survey of herbivore damage in seedlings of a Neotropical wet forest, which found 41% of surveyed leaves intact (de la Cruz & Dirzo 1987). Differences may be driven in part by sampling—de la Cruz & Dirzo sampled only two leaves per plant on 52 species. 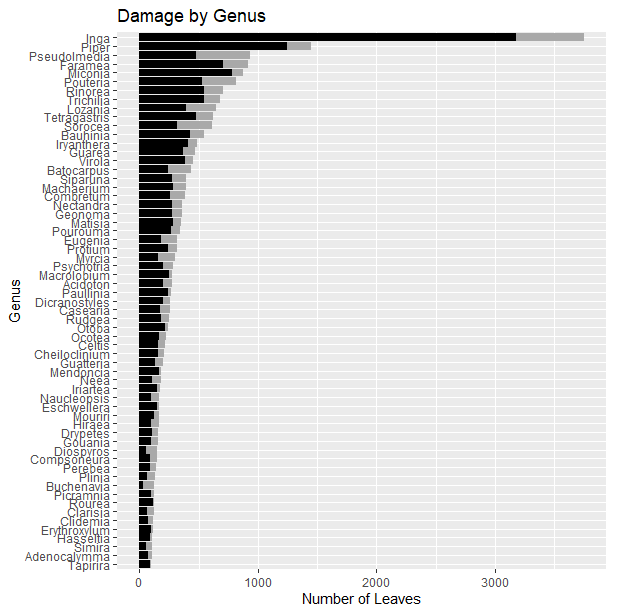 Overall, the herbivore damage observed in the Yasuní FDP appeared to be typical for a tropical wet forest. De la Cruz & Dirzo’s 1987 survey of seedling herbivory found an average standing herbivore damage level of 9.3%. Herbivore damage on all forest trees—adults included—may still be higher. In summarizing the results of 21 studies, Barone & Coley (1996) determined an average herbivory rate of 11.1% per year among shade-tolerant species. Though annual herbivory rate is not directly comparable to standing herbivory, all seedlings in the present study are greater than one year old (median age is 3 years), implying that the observed accumulated damage would be predicted to be much greater than 11% based on herbivory rate estimates from all age classes. 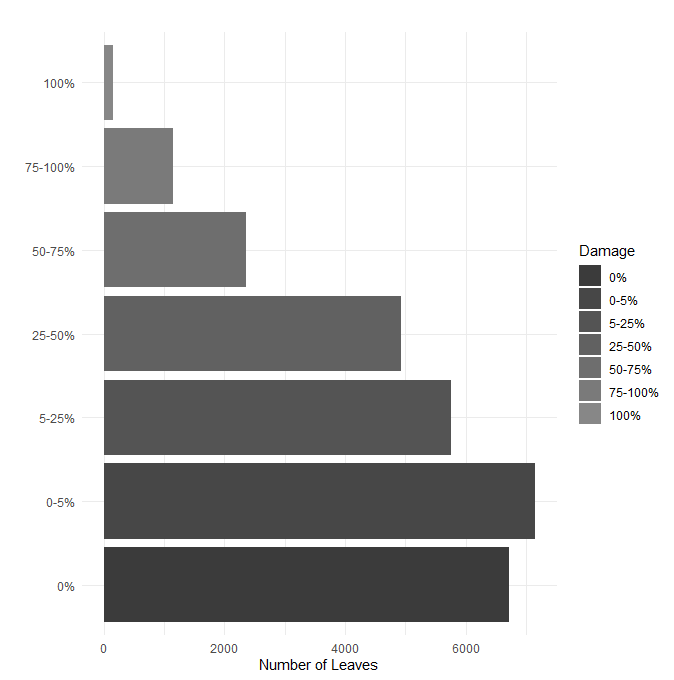 In context, even seemingly small proportions of leaf area loss can have ecological implications for seedlings. In Dipteryx panamensis seedlings, for instance, mortality increases from 15% for seedlings without damage to 100% with an 8% loss of leaf area (Clark & Clark 1985).

The proportion of leaves showing area loss to herbivory varies considerably both from species to species and among genera (Figures 4 & 5). Leaves on seedlings of the genus Inga (Fabaceae), one of the most common genera in the FDP, suffered more herbivore damage compared to the mean of all leaves, with only about 15% of Inga leaves not damaged. Differences are likely driven in part by the variety of strategies evolved under herbivore pressure, with some taxa investing in defense and others on tolerance to herbivory or ability to outgrow sustained damage, for instance (Agrawal & Fishbein 2006).

Herbivory was surveyed in the seedling community of a Neotropical wet forest at the leaf level. In general, the level of leaf area loss to herbivory showed a right-skewed distribution, with many leaves accumulating less than 25% area loss and comparably few having lost more than 75%. Furthermore, damage varied considerably by species and genus, as well as among seedling plots. The observed levels of leaf area loss are expected to have significant ecological consequences, though further work is needed to explicitly link damage with future growth and mortality.

There are many people without whom this project would never have been possible. I owe my sincerest thanks to Dr. Margaret Metz, who generously allowed me the use of her seedling plots as well as borrow the time and efforts of several of her lab members. Dr. Nancy Garwood allowed me access to her seedling herbarium and Dr. Renato Valencia the use of the Yasuní Forest Dynamics Plot. I am also indebted to my two wonderful field assistants, Sofía Montalvo and Letícia Bulascochi Cagnoni, who both worked tirelessly in the field and were constant sources of energy and joy at the station.

Finally, I thank my advisor, Dr. Simon Queenborough, both for introducing me to the strange and wonderful world of tropical ecology and for providing grounded guidance from project inception to present.

Funding for this project was provided by the Yale Tropical Resources Institute, Yale Alan S. Tetelman Fellowship for International Research in the Sciences, as well as the Benjamin Franklin College Richter Summer Fellowship.